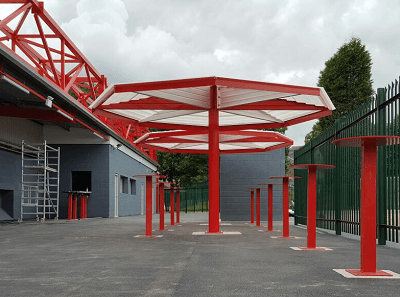 With roots spanning as far back as the 1890s, the club is recognised as being one of the oldest names in football.

But for all of its historical connections, the club’s continued to move with the times, an ethos that’s epitomised by its most recent redevelopment programme, which involved creating a European-style fan zone.

The project saw almost every element of the club’s grounds being transformed and a new 1,500 capacity all-seater stand being built. A new pitch was also laid and new fencing and walls installed to generate space for additional perimeter advertising boards.

The club wanted spectators to be able to enjoy the fan zone, regardless of what the weather’s doing, so they called on us to turn the open space into a sheltered space.

What exactly did we do?

We installed two of our ground-mounted Connekt umbrella-style canopies for several reasons, which included the fact they’re large enough to cover the area within the fan zone. They each span five meters, making them the perfect size to adequately cover the 25m2 floor space.

We then used our bespoke colour matching service to truly customise the canopies. Alternating colours of red and white were used on the roof support beams to create an eye-catching and tailored canopy installation that exactly matched the club’s traditional strip. 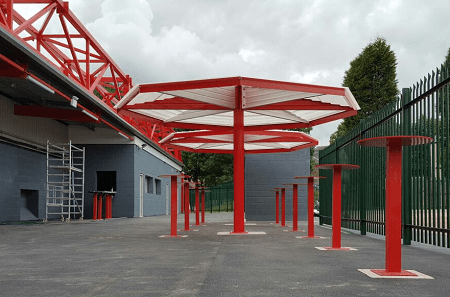 We had to work fast!

We love a challenge and we always rise to them and this project shows just how great we are at it. When the club contacted us, they wanted their canopies to be installed before the football season started again, which was just four weeks away!

Being the industry leaders that we are, we turned what would usually take around eight weeks, around in half the time and still maintained our high standards.

Our team pulled together to provide a set of football stand canopies that score on so many different levels and have provided Accrington Stanley, and their fans, with the right result.

Here’s what David Burgess, the club’s MD, had to say about our work: “Canopies UK provided us with two umbrella canopies that were painted in our club colours.

“The service we received from them was first-class, from the drawing stage, right through to the assembly and fitting of the canopies, which are a major feature within our fan zone.”

For more information or if you have a similar project you’d like our help with, contact us on 01254 777 002 or email karen@canopiesuk.co.uk. In the meantime, learn more about our sport spectator canopies capabilities and the benefits of installing them. 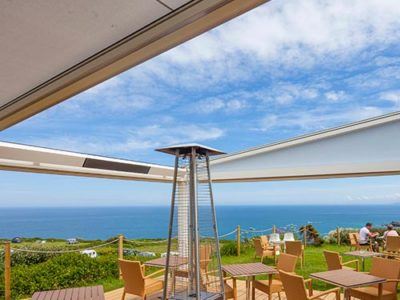 Pick of the best: 3 of our most favourite hospitality canopies

Take a look at three hospitality projects that demonstrate the benefits of installing hospitality canopies for pub, bar, restaurant and hotel managers.

The Wildside at Savage Garden retractable hotel rooftop bar has arrived. Take a look at the exclusive venue at the DoubleTree Hilton Tower of London. 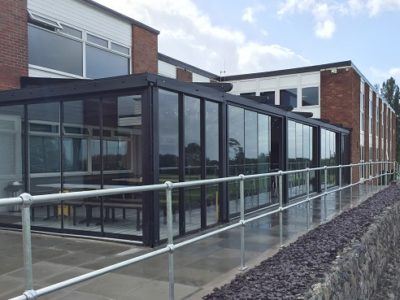 School dining canopies are being used by many schools these days to create extra dining and seating space, just like St Michael’s High School in Chorley, recently did. Read our case study for the full details.