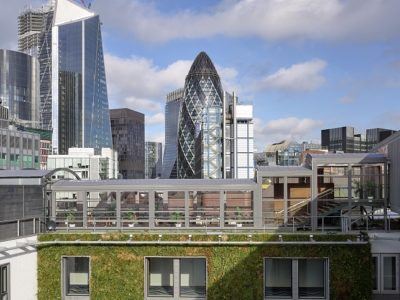 We’re often required to ‘think outside of the box’ to transform our customers’ visions into reality.

However, a project we recently worked on at the DoubleTree Hilton Tower of London rooftop bar, took our canopy capabilities to a whole new level – 12 storeys high to be precise.

Known as Wildside @ Savage Garden, the project involved transforming the Skylounge at Hilton London into an exclusive rooftop bar complete with not one, but six retractable roofs.

The project involved making a real statement, which we enabled the Hilton to do by helping them make the most of every single square inch of space that was available to them – both inside and out.

The north Wildside terrace is a dedicated events space that can be hired for private events and functions, such as weddings, and looks out over many of London’s landmarks, including Tower Bridge, The Gherkin, The Shard and St Paul’s Cathedral. The entire area is incredibly versatile and designed to be used in all sorts of different ways, including transforming it into a Narnia wonderland. 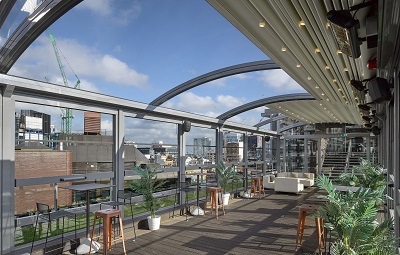 Being up on the roof, meant that the bar, particularly the Wildside terrace, was at the mercy of the weather, so we were called upon to install one our Cantabria canopies, which features not one, but six retractable roofs that can be opened and closed independently of each other at the touch of a button.

From a design perspective, it’s a real head-turning feature, and from a practical perspective, it enables the terrace to be quickly and easily transformed from an al fresco summer hotspot into a winter events space for private hire and seasonal pop-ups.

In addition to the highly stylish and unique retractable waterproof roofs, the canopy also features integrated guttering, LED lighting, heating and a combination of fixed and vertical sliding glass screens that can be retracted in the finer weather and partially or fully closed in cooler, wetter and more changeable weather.

Meanwhile, the overall structure has been painted grey, so that it seamlessly blends in with the surroundings and the inside is white, which helps make the space feel bright and spacious.

Working 12 storeys up meant we had to overcome several logistical and practical challenges in order to install the canopy, which spans 37 metres in length and stands at almost six metres tall.

A total of 18 crane lifts were used to move the 20,000kg of materials that were needed to build the canopy, from the ground to the top floor within extremely tight parameters. Due to the site’s central London location, there was limited space for the materials on both the ground level and up on the roof.

But thanks to our careful planning and logistics and working closely with the hotel and other contractors, we were able to work around these space restrictions.

We also had to overcome several other challenges that really put our skills to the test during the four-month project, which included increasing the overall height of the 36 metre-long canopy so that it incorporated the terrace steps. This was achieved through a combination of clever design and joining systems and creating a Perspex-filled arc feature.

And because the building wasn’t totally square with the canopy, we made a bespoke GRP system that linked the building and the system neatly together. While state-of-the-art Hilti scanning tools and bespoke structural calculations were used to fix the actual structure to the existing roof.

The sky’s the limit

Our extensive experience and tried-and-tested processes, particularly our site-specific calculations, all really came into play for this installation. For instance, by scanning the concrete, we were able to create a bespoke fixing method that would cause minimal disruption to the structure.

It’s innovative ways of working like this, that also meant the hotel was able to stay fully open and all nearby guest and conference rooms and bar areas could still be used as the Cantabria canopy took shape.

“The canopy on Wildside has been flawlessly designed to accommodate events throughout the year. Come rain or shine, guests can enjoy everything from drinks to private events in the space as the retractable canopy – designed and built as bespoke for Savage Garden – means that the terrace can be cosy and covered during winter, and the perfect suntrap come summer.”

Want to find out more about our Cantabria canopy or how you can create additional space within your existing space? Or perhaps you’d like to arrange a free site survey? Contact us on 01254 777 002 or info@canopiesuk.co.uk. 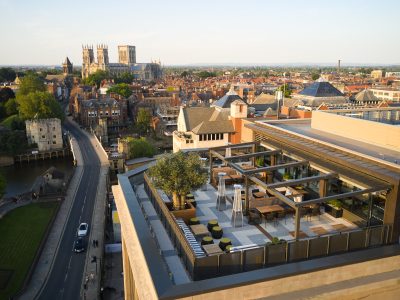 The right outdoor structure can transform your restaurant. Here are some ideas to get you started on optimising your outdoor space and maximising your covers. 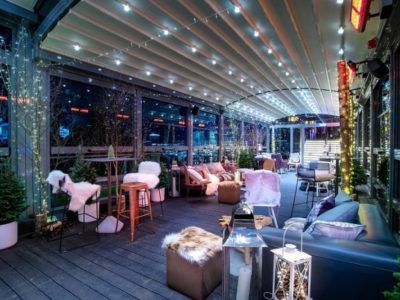 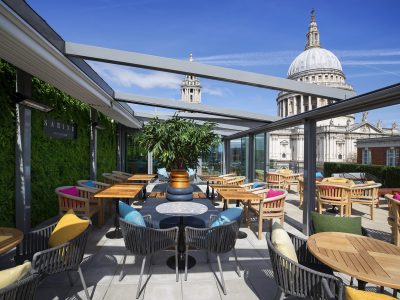 How a retractable terrace roof could help your bar or restaurant serve more customers in every season.