We were contacted by Framingham Earl High School who wanted us to create a covered outdoor dining area that provided cover year-round.

The school wanted a canopy that would provide shelter for students all year round. The canopy would create an outdoor covered area where children could eat lunch and spend time during break times without worrying about being affected by poor weather. 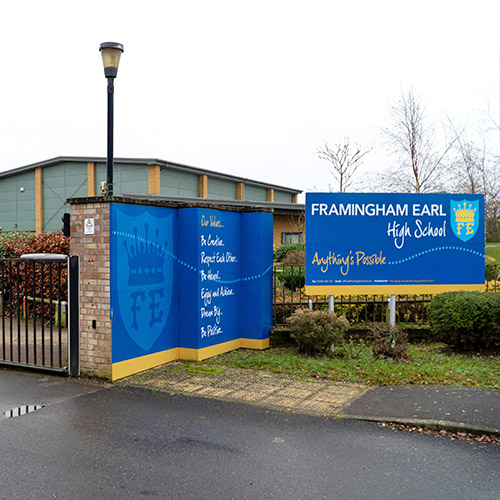 The client needed a long-lasting, maintenance-free solution with minimal posts obstructing the existing outdoor space. A site survey would need to be taken to ensure that the canopy would cover the largest amount of space with the fewest obstructing posts possible.

The area in which the canopy was being installed was in constant use during the day, so we needed to carry out the works at a time that would not impact the students. As the site was in an exposed area, we also needed to ensure that the canopy was designed for wind and snow loads.

The ground was due to be re-tarmacked after the works were completed. This meant the ground was prepared by the school’s contractor before the canopy was installed, and the final surface was to be laid afterwards.

During a site survey, we discovered that a drain ran alongside the building at an unexpected angle, so changes had to be made to the canopy to accommodate this.

We carried out the work during the summer holidays so as not to disrupt students. We undertook several site surveys to ensure the canopy could be installed as planned and would be completed in time for the tarmac to be re-laid. We met with the client on-site to discuss options and advise on the best solution for their requirements.

Our Connekt back to back canopy with a double span and central posts was the best solution for the area. The canopy covered the largest amount of space with as few posts as possible, and benches could be placed on either side of the posts so as not to create any obstructions.

The canopy was originally planned with five central posts. However, upon discovery on a drain running alongside the building on our site survey, we needed to come up with a solution. Special brackets were designed and calculated by our structural engineer to overcome the issue with the drain, and the canopy was able to go ahead as planned. 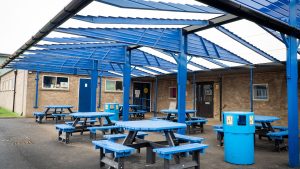 Students at Framingham Earl High School now have a dedicated, covered outdoor dining space that protects them from the elements all year round. That means they can now enjoy their lunch outside, whatever the weather. 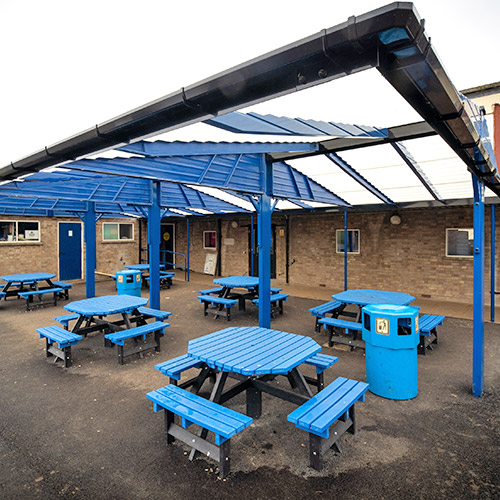 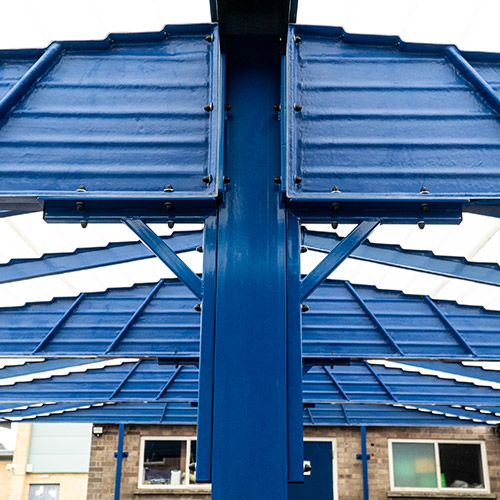 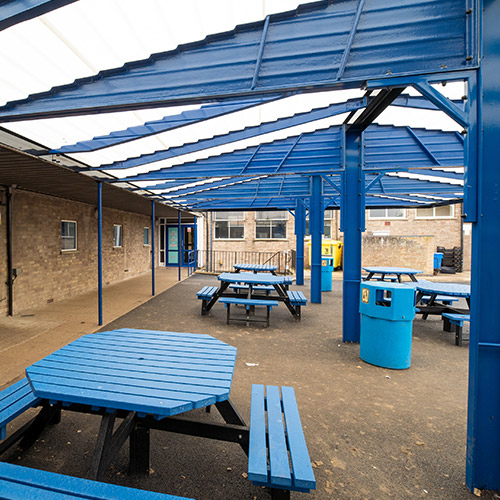 “We are particularly pleased with the canopy, and it has fully met the design brief.  The process, from our first discussions with the sales team about design and cost through to erection of the canopy was flawless.

The Area Sales Manager fully understood our requirements, and this rapidly translated into the canopy design that was delivered.  The team who attended site were extremely professional and worked seamlessly with the school site staff to complete the work within the agreed timescales and with minimum disruption to the school.

The students now have a fully covered external area which has allowed that social space to be more effectively used in all weathers.  We have used Canopies UK in three of our Trust schools now and would have no hesitation in recommending them.”

Back to all case studies
School Outdoor Dining Canopies